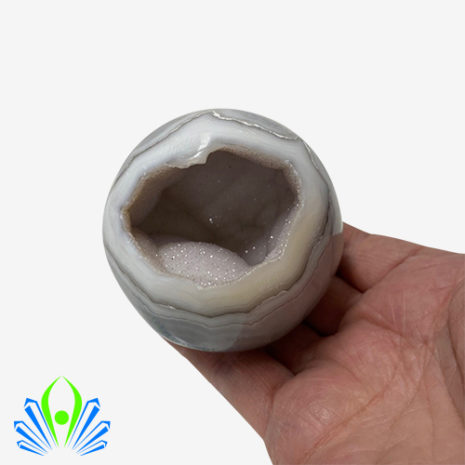 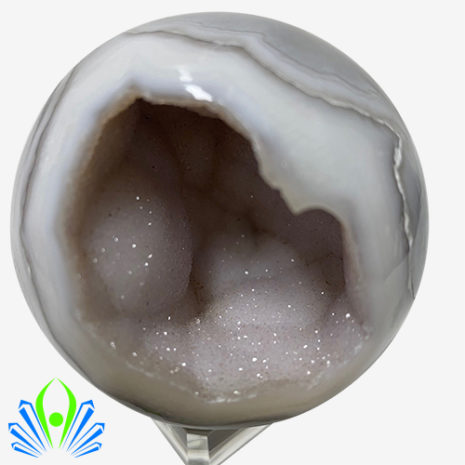 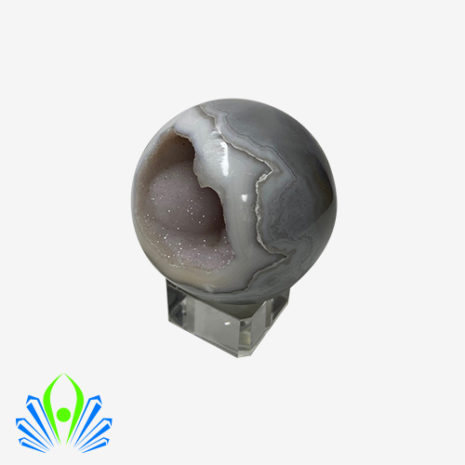 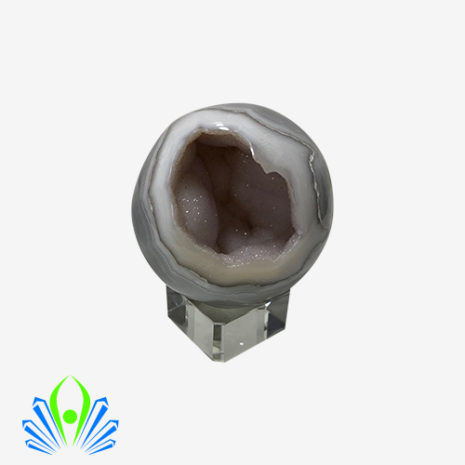 Beautiful natural grey and white agate sphere a crystalised geode; it comes with a pewter satnd for display purpose.

This Agate Druzy Sphere is an amazing piece to add to your collection.

Part of the Chalcedony family, Agate stones are banded in layers or stripes and have many eye markings or specks of colour on them.

Also, people love the smooth polished texture and how versatile it is for various gift ideas and jewellery pieces.

Druzy is a small geode formation with many crystal points shooting out of it representing the unity of the collective.

It is great to use in group settings to bring clarity to all and amplify the collective creativity in a relaxed and balanced head space.

Druzy is a powerful stress reliever bringing healing on a physical, mental, and spiritual level. It stimulates the imagination and awakens one to a feeling of self love and empowerment.

It balances the emotional body to relieve stress, depression, sadness, and fear.

The key properties of Agate are that it enhances mental function, improves concentration,  enhances perception and analytical abilities.

Agate is a soothing and calming gemstone that also heals inner anger, anxiety and helps in the strengthening of relationships, and it instils security and safety.

with The key properties of Agate are that it enhances mental function, improves concentration,  enhances perception and analytical abilities.

Agate is a soothing and calming gemstone that also heals inner anger, anxiety and helps in the strengthening of relationships, and it instils security and safety.

Good for transmutation as it assists with the emotion of acceptance and physical endurance.

Agate is a very grounding stone that balances the physical, emotional and intellectual bodies.

It cleanses and stabilises the aura, eliminating and transforming negativity.

For example, the Babylonians believed the properties of Agate could be used to dispel evil energy and would place it around their home accordingly.

Also, there are some famous Babylonian axe heads that were made out of banded agate dating back before 3000BC.

Persians believed this healing stone could be used to defend against a storm, they did this by burning the agate, which we wouldn’t recommend nowadays.

Similarly, while Islamic cultures believed that Agate helped ward off evil eye and tragedies, Egyptians thought the stone helped protect against natural disasters and could deliver powers of speech.

However, the Chinese believed the Agate crystal provided spiritual protection, According to them, the crystal helped make them stay more positive and make space for good luck and fortune.

One of the most famous pieces of agate comes from the Ancient Greek times and is known as as the Pylos Combat Agate.

Despite being less than one and a half inches wide, it depicts a warrior in hand-to-hand combat. It is said to date back to around 1450 BCE.

Our exceptionally luscious Agate Druzy Sphere is perfect for those looking to take their inner stability, composure, and maturity to the next level. Its warmth makes it a great security blanket for those otherwise too afraid of failure to try new things!