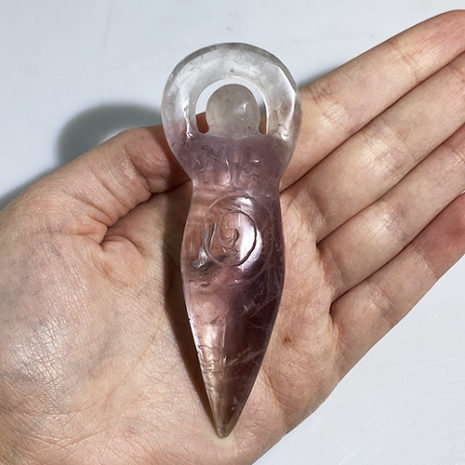 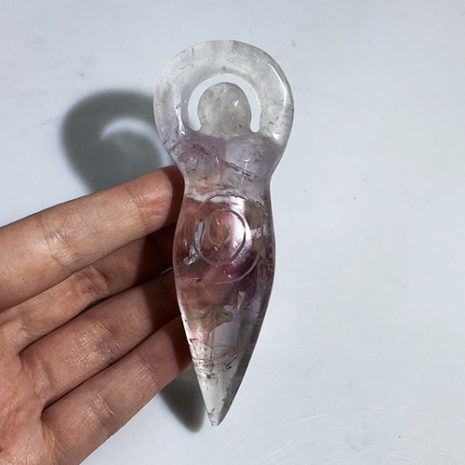 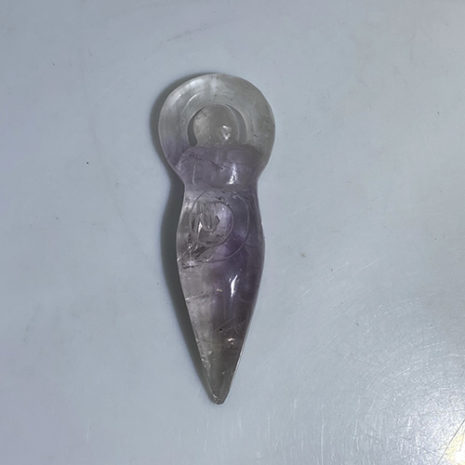 The Spiral Goddess, as a symbol of feminine power, fertility, life cycles, celebration, and surrender, serve as a visual reminder for women everywhere that the unique power they hold within is not something to be feared or hidden in shame, but something to be welcomed with open arms and a willingness to let all of it mold and transform them into a different version of themselves.

Amethyst is a powerful and protective stone, It guards against psychic attack, transmuting the energy into love and protecting the wearer from all types of harm, including geopathic or electromagnetic stress and ill wishes from others.

If you’ve ever seen a pendant, a figurine, or a tattoo that features the silhouette of a woman with both hands raised in the air or linked together upwards, and a spiral on her belly, that is the Spiral Goddess.

This symbol is a common imagery in Paganism and Wicca and is used liberally by worshippers of the Goddess.

The most important and distinctive feature of this goddess symbol is the spiral drawn on the belly of the woman.

As one of the oldest signs that has existed in nature before the majority of the languages and alphabets we know today, spirals have taken on many different definitions across cultures and centuries.

They’re a popular Celtic symbol and can be seen on ancient structures dating back thousands of years.

More than anything, though, spirals represent the constant evolution of nature and life.

The lines symbolize progress and constant motion, as you can virtually draw a spiral that goes on and on and never ends, at the same time, it represents cycles and journeys like the continuous cycle of life itself.

In relation to the Spiral Goddess, you’ll notice that the spiral is either drawn right in the center of the woman’s belly or just below it, in the navel area.

In the latter case, it could represent the woman’s menstrual cycle or the birth of new life from a mother’s womb, either way, it represents the power of women to reproduce and bring forth new life.

the spiral from its outermost sphere going in, you are going to hit a dead end sooner or later, this means disconnecting from the bigger picture and stagnating progress. It is related to spiraling down, or when things get worse and worse all the way to a point of no return.

Another important symbolism present in the Spiral Goddess is the way her hands are held above her head.

It’s a poignant imagery that comes in contrast to the usual depiction of women holding their hands clasped down in front in order to conceal their lady parts.

This time, the Spiral Goddess allows herself to be fully exposed, to symbolize feminine power and the reclamation of everything powerful about her.

May it be her menstrual cycle, her sexual desires, her reproductive organs, her pregnancy, or the flow of her chakra from the core out to the world, the Spiral Goddess leaves it all in plain view instead of hiding everything that makes her special, unique, and strong.

Instead of cowering in fear or shame about the natural progress of her body and life, the Spiral Goddess stands steadfast and claims her entire being.

Amethyst encourages sobriety, having a sobering effect on overindulgence of alcohol, drugs or other addictions.

It calms and stimulates the mind, helping you become more focused, enhancing memory and improving motivation.