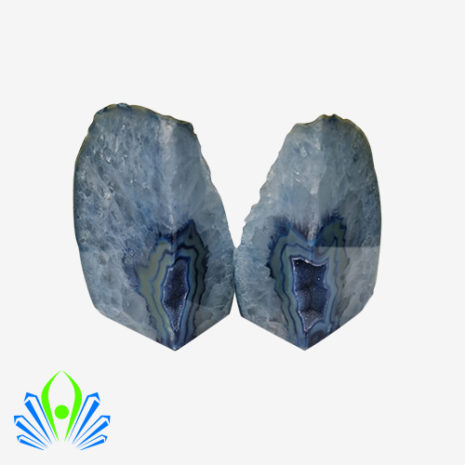 This amazing quality light Blue Agate bookends set will be an amazing piece for any room!

A soothing and calming stone, working slowly to bring great strength and self-confidence.

Blue Agate not only helps harmonies your energies but also reduces negative energies, helping you stay relaxed and peaceful.

It soothes and calms, healing inner anger or tension and creates a sense of security and safety.

Agate is a soothing and calming stone, working slowly to bring great strength and self-confidence.

This beautiful Blue Agate set of Bookends has geodes and some amazing quartz patterns in the middle.

Blue Agate not only helps harmonies your energies but also reduces negative energies, helping you stay relaxed and peaceful.

The protection from negative energy is one of the most appealing nature of Agate.

It improves concentration, heals inner anger and stimulates love and strength so one can move on.

A very grounding stone that balances the physical, emotional and intellectual bodies.

Agate can be used to stimulate analytical capabilities and helps to awaken ones inherent talents.

It enhances creativity and strengthens the intellect, making it a beneficial stone for both students and artists.

Agate also eliminates negativity and is known as a good luck stone.

The meaning of this blue coloured gemstone is calmness, very calming and relaxing.

Think of blue agate like you are lying down in a field looking up at the clear blue sky.

The protection from negative energy is one of the most appealing nature of agate.

It is one of the best gemstones for those who need to communicate with many people in daily life and even for those to want to recover their self-confidence.

The stone is used as a means of healing and building strong emotional health in order to keep physical health in check.

Agate instills security and safety, Blue Agate, with its blue crystal energy, will open and clear the Throat Chakra.

The Throat Chakra is the voice of the body, a pressure valve that allows the energy from the other chakras to be expressed.

When talking about good luck charms in the jewelry market, Agate always comes up in the discussion.

It is one of the most powerful luck stones out there with its power coming from multiple quartz minerals that make it.

The healing stone agate works slowly, but unfolds a tremendous power. As a protective stone, it strengthens self-confidence, promotes self-acceptance and gives comfort.

The ancient Egyptians made of agate healing stones scarab as a lucky charm.

In the middle Ages, people believed that the protective stone made them invisible and thunder and lightning.

he agate is attributed to a strong healing effect in mental or physical complaints, such as a protective stone for pregnant women or as a consolation in separations.

The  blue agate is one of the most important healing stones of all.

As a protective stone you should carry it as often as possible in all its forms, whether as an agate amulet, chain, or scarab.

If, on the other hand, it is intended to have a targeted effect on an organ or a body site, direct skin contact is very important.

Have it as close as possible to the affected organ or directly on the body site.