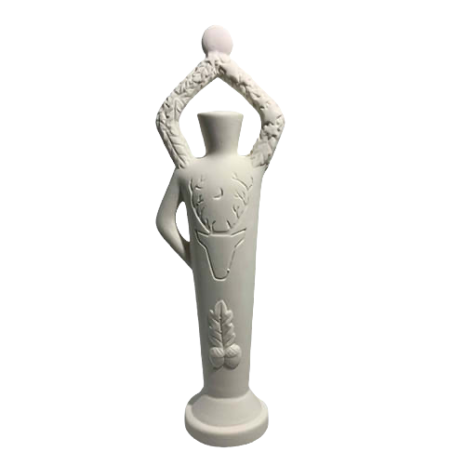 This beautiful Ceramic Pentagram God can be used as a display piece in your studio or on your altar!

This beautiful ceramic pentagram god piece has a double-sided design, so can be used as a display from either side!

Paint, decorate or customize your piece to your own individual style!

This beautiful ceramic pentagram god piece has a double-sided design, so can be used as a display from either side!

Paint, decorate or customize your piece to your own individual style!

God/Goddesses have been linked with virtues such as beauty, love, sexuality, motherhood, creativity, and fertility (exemplified by the ancient mother-goddess cult).

Something you may not have heard before is the belief that humans are actually made from stars.

From a purely scientific viewpoint, humans are made up of all of the elements that were created by a star (or specifically, a supernova).

The pentagram is a common Pagan/Wicca symbol yet its origins are actually from ancient Sumerian where the symbol was used to represent the human Physical body and Elemental form.

For example Head, Arms and Legs are physical and Earth, Air, Fire and Water are elemental.

The Christians themselves believed the symbol was protective and was worn on jewellery.

The pentagram was believed to symbolize Christ.

During the 14th / 15th century, there was a rise of occult practices (the study of astrology, magic, alchemy, etc.) that all used the pentagram symbol.

The Christian church of that time accused the practices of heresy, so naturally, anything associated with the occult became names as evil and bad.

There are five elements associated with the Pentagram.

Four of matter (earth, air, fire and water) and one of spirit. See below for the correct representation of each element.

A circled pentagram contains and protects.

The circle symbolizes eternity and infinity, the cycles of life and nature.

In the 20th century, Hollywood started to use the pentagram as a symbol of evil and devil worship which now makes some people believe the association of evil with the symbol is true.
When in fact, the pentagram has no historical ties to evil or “Satan-worshipping.”
Even the Church of Satan who used an upside-down pentagram with a goat head do not worship the devil and are simply atheist.

The pentagram, or five-pointed star, has been in existence for thousands of years. Over that time, it has had many meanings, uses, and depictions associated with it.

The five-pointed star, also commonly called a pentagram, has been in use for thousands of years by a variety of cultures. Most uses of the pentagram in Western society today descend from Western occult traditions.

Occultists have long associated the pentagram with several beliefs including:

The pentagram is commonly accepted as a symbol of protection and exorcism, driving away evil and other unwanted energies and entities.