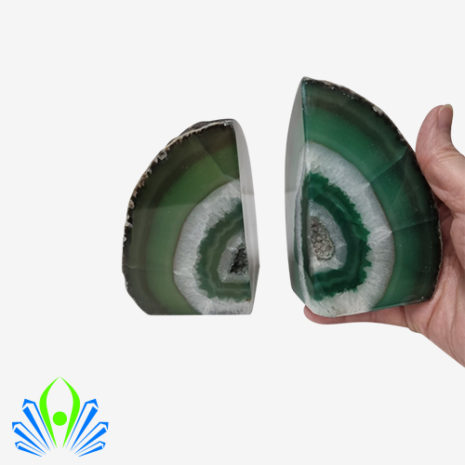 This amazing quality Green Agate bookends set will be an amazing piece for any room!

The green agate variety is one of the largest and most impressive subtypes of this stone.

Although there are hundreds of variations of this rock, there is no doubt that it stands out for its brightness and value as an energy gem.

In fact, it is one of the most coveted among accessories.

Blue Agate not only helps harmonise your energies but also reduces negative energies, helping you stay relaxed and peaceful.

According to experts, the green variety of agate enhances the balance between emotions and the physical body so it can be said that it is the healing rock par excellence among the multiple variants of agate that nature offers you.

This beautiful Green Agate set of Bookends has some amazing quartz patterns in the middle.

Agate is a soothing and calming stone, working slowly to bring great strength and self-confidence.

According to modern healers who use stones in healing, green agate increases compassion, generosity and a keen sense of justice.

It also encourages these traits in others, along with enhancing mental and emotional flexibility, improving decision-making and resolving disputes.

The protection from negative energy is one of the most appealing nature of Agate.

It improves concentration, heals inner anger and stimulates love and strength so one can move on.

A very grounding stone that balances the physical, emotional and intellectual bodies.

Agate can be used to stimulate analytical capabilities and helps to awaken ones inherent talents.

It enhances creativity and strengthens the intellect, making it a beneficial stone for both students and artists.

Agate also eliminates negativity and is known as a good luck stone.

The meaning of this blue coloured gemstone is calm, very calming and relaxing.

Think of blue agate like you are lying down in a field looking up at the clear blue sky.

The protection from negative energy is one of the most appealing nature of agate.

It is one of the best gemstones for those who need to communicate with many people in daily life and even for those to want to recover their self-confidence.

According to gemmotherapy, green agates have an important meaning for the balance between emotions and the physical body, so they are very suitable for fighting psychosomatic diseases.

Green agate is also used since time immemorial to enhance fertility, helping to prevent abortions and discomfort during pregnancy.

Agates can be used in any direction to attract change.

If we use it in the centre it brings balance, health, and connection with the earth element.

In the east, it helps protect children and in the southeast, it enhances fertility.

The stone is used as a means of healing and building strong emotional health in order to keep physical health in check.

The green agate is related to projective energy and its related element is Earth.

Provide enough energy so that your body can achieve an improvement in your eye health and also enhance fertility.

When talking about good luck charms in the jewellery market, Agate always comes up in the discussion.

It is one of the most powerful luck stones out there with its power coming from multiple quartz minerals that make it.

The healing stone agate works slowly but unfolds a tremendous power. As a protective stone, it strengthens self-confidence, promotes self-acceptance and gives comfort.

The ancient Egyptians made of agate healing stones scarab as a lucky charm.

In the middle ages, people believed that the protective stone made them invisible and thunder and lightning.

As a protective stone, you should carry it as often as possible in all its forms, whether as an agate amulet, chain, or scarab.

If, on the other hand, it is intended to have a targeted effect on an organ or a body site, direct skin contact is very important.

Have it as close as possible to the affected organ or directly on the body site.