Red Jasper is known for grounding and connection to Mother Earth.

Red Jasper carries projective energy to it. It is said in folklore that images of lions or archers are engraved on it to help guard against poisons.

Red jasper defends against negative energy and sends it back to its originator.

Red Jasper is an ancient and sacred stone that has held meaning throughout dozens of cultures since the beginning of human existence.

This is due to the combination of its relative popularity (meaning that it exists in various locations and was readily available to the people in them) and its attractive appearance.

The colours that Jasper appears in include blue, red, green, yellow, black, or even the distinctive green-and-red speckled variety known as Bloodstone.

This means that it is present all over the world, as quartz is one of the most

There have been thousands of purported uses of Red Jasper throughout history and across the globe.

It has been said to stimulate energy, protect from misfortune (especially misfortune of a supernatural sort), and represent vigorous faith in a cause or religion.

Its popularity spread from Ancient Greece and Rome to Christian Europe over the Middle Ages, where it became a popular religious stone.

When paired with Bloodstone, it represents the blood of Christ.

It is also said to be sacred to the apostle Peter, “the rock,” for the strength and solid foundation he lent to the Church.

Today, Red Jasper is as popular as ever and is widely available and relatively inexpensive.

If you seek a protective and energizing amulet, Jasper is one of your best options and will serve you well for many years to come, as it has served people throughout history.

asper is the supreme nurturer. It sustains and supports you during times of crisis. It brings wholeness and reminds people to help and care for each other.

Jasper also aligns all of the chakras and can be used in chakra balancing and layouts.

Red Jasper is aligned with the Base or Root chakra, grounding you into the stability and strength of the Earth’s vibrations.

The other colours of varieties of Jasper can be used on the other chakras, amplifying and supporting the energies of each stone.

Jasper encourages dream recall and can be used for shamanic journeys to ensure that you return safely to your body when your journey is done.

It also absorbs negative energy and cleanses your entire aura.

It balances Yin and Yang forces within the etheric body, ensuring no feminine or masculine energy dominance.

It clears the atmosphere of pollutants, including the negative effects of unwanted electromagnetic frequencies.

Red Jasper is a stone for good health, it strengthens and detoxifies the liver and the blood.

It dissolves blockages in the liver bile ducts.

It is a good stone for setting and strengthening your emotional boundaries and cleanses the aura of negative vibrations.

Placed under the pillow, it aids dream recall. 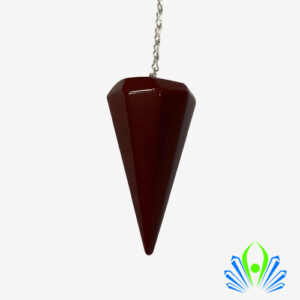